Jalan Malioboro (English: Malioboro Street) is a major shopping street in Yogyakarta, Indonesia; the name is also used more generally for the neighborhood around the street. It lies north-south axis in the line between Yogyakarta Kraton and Mount Merapi. This is in itself is significant to many of the local population, the north south orientation between the palace and the volcano being of importance.

The street is the center of Yogyakarta’s largest tourist district surrounded with many hotels and restaurants nearby. Sidewalks on both sides of the street are crowded with small stalls selling a variety of goods. In the evening several open-air streetside restaurants, called lesehan, operate along the street. Less obvious to the tourist, but more for the local population, side streets, lanes and structures that lead on to Malioboro are as important as the street itself.

From malls to marts, restaurants to bars, small priced shops to expensive boutiques, you will get them all. So, take your pick at the shops and the commodities sold there, in accordance with your budget and the size of your pocket. 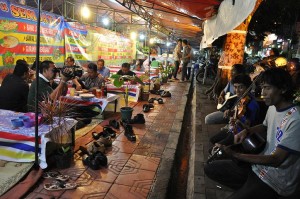 The street was for many years two-way, but by the 1980s had become one way only, from the railway line (where it starts) to the south – to Beringharjo markets, where it ends. The largest, oldest Dutch era hotel, Hotel Garuda, is located on the street’s northern end, on the eastern side adjacent to the railway line. It has the former Dutch era Prime Minister’s complex, the kepatihan, on the eastern side.

For many years in the 1980s and later, a cigarette advertisement was placed on the first building south of the railway line – or effectively the last building on Malioboro, which advertised Marlboro cigarettes, no doubt appealing to locals and foreigners who would see a pun with name of the street with a foreign product being advertised.

It does not reach the walls or grounds of the Yogyakarta palace, as Malioboro ceases in name adjacent to the very large market Beringharjo (on the eastern side as well). From this point the street changes name to Jalan Ahmad Yani (Ahmad Yani Street) and has the former Governors residence on the western side, and the old Dutch Fort Vredeburg on the eastern side.