Mendut temple is a ninth-century Buddhist temple – Mendut temple Built around early ninth century AD, Mendut is the oldest of the three temples including Pawon and Borobudur. This temple is a ninth century Buddhist temple, built and finished during the reign of King Indra of Sailendra dynasty. It is located in Mendut village, Mungkid sub-district, Magelang Regency, Central Java, Indonesia. The temple located about three kilometres east from Borobudur. Mendut, Borobudur and Pawon, all of which are Buddhist temples, are located in one straight line.

In 1836 it was discovered as a ruins covered with bushes. The restoration of this temple was started at 1897 and it was finished at 1925. Some archaeologists who had conducted research on this temple were JG de Casparis, Theodoor van Erp, and Arisatya Yogaswara. 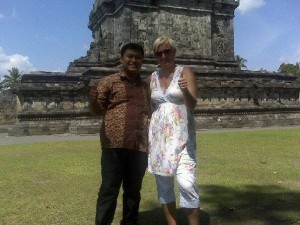 The 26.4 metres tall temple is facing west. The stairs projecting from the west side square elevated base is adorned with Makara statue on each sides, the side of the stairwall carved with bas-relief of fable narrating the animal story of buddhist teaching. The square terrace surrounding the body of the temple was meant for pradakshina or circumambulating ritual, walking clockwise around the temple. The outer walls is adorned with bas-reliefs of Boddhisattvas (buddhist divinities), such as Avalokitesvara, Maitreya, Cunda, Ksitigarbha, Samantabhadra, Mahakarunika Avalokitesvara, Vajrapani, Manjusri, Akasagarbha, and Boddhisattvadevi Prajnaparamita among other buddhist figures.

Originally the temple had two chamber, a small chamber in the front, and the large main chamber in the center. The roof and some parts of the front chamber walls are missing. The inner wall of front chamber is adorned with bas-relief of Hariti surrounds by children, Atavaka on the other side, Kalpataru, also groups of devatas divinities flying in heaven.

The main room housed three beautifully carved large stone statues. The three statues are the Buddhist main divinities revered in Mendut temple which can explain the spiritual purpose of the establishment of this temple. The 3 metres tall statue of Dhyani Buddha Vairocana was meant to liberate the devotees from the bodily karma, at the left is statue of Boddhisatva Avalokitesvara to liberate from the karma of speech, at the right is Boddhisatva Vajrapani to liberate from karma of tought.
Today, Candi Mendut (Mendut Temple) is frequently used to celebrate the Waisak day every May full moon and the pilgrims from Indonesia and all parts of the world come to this ceremony.