Sukuh Temple is a Hindu complex

Sukuh And Ceto Temple – Dating from around the same time as the later remains to be found on Mt Penanggungan, the terraced sites at Sukuh and Ceto on the western slope of Mt Lawu are unique examples of a late Majapahit architectural style. This was one in which the formal elements of Hinduism and Buddhism became absorbed by local beliefs. The traditional respect shown towards ancestral spirits emerged to play a central role in religious ceremony. It appears that the temples of Sukuh and Ceto became mediums for the deliverance of the souls of deceased ancestors.

At Sukuh, situated 910 metres above sea-level, the site comprises three terraces, which in former times were approached from the plains by means of a long, stone stairway.

The main building, located on the topmost terrace, takes the form of a flat topped pyramid, about six metres high. Narrow steps lead up through the building to the upper level, where religious ceremonies were no doubt once performed. The remains of a water system discovered on and around the pyramid suggest a connection with these rituals. The complex is entered from the western end of the lowest terrace via a small stone pavilion. The floor of the narrow entrance passage is decorated with the realistic image of a lingga / yoni, carved in relief. This symbol, as well as many others to be found within the temple site, appears to be connected with ancient fertility rites and ancestral cults.

The strange imagery at Candi Sukuh has often been compared with that of ancient Mexico, or even Egypt! Yet, despite the curious style, the contents of the reliefs and sculptured forms are unmistakeably 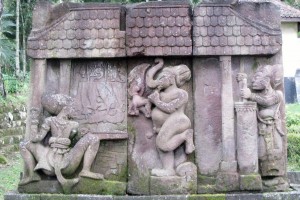 Hindu-Javanese. The emphasis, however, lies on mystical themes dealing with the process of deliverance, or ‘liberation’ of the soul. Thus we find the story of the Sudamala, the ‘deliverance of Durga’, as well as that of Garuda freeing his mother from enslavement by serpents. These stories of Indian origin, into which the Javanese wayang heroes make their entrance, became especially popular towards the end of the Majapahit period. Dated inscriptions discovered at Candi Sukuh range from between A.D. 1416 and 1456. The other important site on Mt Lawu, Candi Ceto, was built at around the same time as Candi Sukuh. Inscriptions found at the

temple reveal dates equivalent to A.D. 1468, 1472 and 1475. As at Sukuh, Candi Ceto is laid out on a system of terraces, which may date from an earlier period. No less than 14 separate levels were noted when the site was first investigated.The unusual sculpture and relief carving at Ceto, similar to that found at Sukuh, is still not fully understood. The eighth terrace, in particular, displays some unique forms. An arrangement of stones, laid out flat, reveals the image of a large bird, or possibly a bat, with wings outstretched, upon which sits a stone tortoise. Connected with this central figure are other stone images, notably a triangle depicting nine animal figures, a lingga with four balls placed below the top, as well as flat, circular stones displaying seven and nine pointed stars.