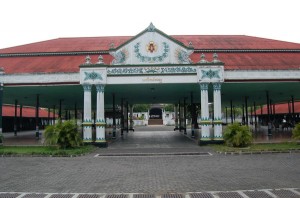 Yogyakarta Sultan Palace – excellent jogja driver +62 819 155 342 86 Kraton The Jogja’s Sultan Palace The Sultan’s Palace or Kraton, with its grand and elegant Javanese architecture, lay in the center of the city. It was founded by Pangeran Mangkubumi I. He choose the right for the site of the building, right between Winongo River and Code River a swamp area that dried up then. The Sultan’s Palace stretches from the north to south. the front yard of the Sultan Palace is called Allun-All;un Utara ( North Square) and the back yard called Allun-Allun Selatan (South Square ). The design of this historical building demonstrates that the Palace, the obelisk (the Tugu, the column) and the mount Merapi positioned in one line. It is believed that the axis is blessed. In the-old times Sri Sultan is used to concentrated his mind long this axis before leading meeting, making decision or giving order to his people. Each part of the building has its own name. The Palace meeting is called Pagelaran. It is the place where the formal meeting of the Kratons’s officials are held. Manguntur Tangkil Hall is the place where the Sultan has his set. This hall is in Siti Hinggil, Siti means ground or land while Hinggil means high, so it called Siti Hinggil because the place where it built is higher than any other ground around it. It was once a tiny island on the swamp. The front gate is called Danupratopo. Two giants called Gupalo guards it. One is called Cingkorobolo and the other is Boloupoto. The two statues are perceived may protect the palace from any harm or evil.The main part of the Sultan is called Purworetno, aplce where the Sultan performes his duties. beside Purworetno there are twostory buidings callled Panti Sumbago. This biuding is the Sultan’s privates library. The building wher the the Sultan lives called Gedong Kuning

Yogyakarta Sultan Palace with its grand and elegant Javanese architecture

The palace was founded by the first Sultan, Sri Sultan Hamengkubuwono who fathered a line of Jogjakarta kings. Relevant to the name, the Sultan Palace has its own rules, self-governing systems and traditional custom that is still preserved up to the present. Lying in the center of Jogja city, this palace is the main tourist attraction in Jogja. The palace is now dwelling place of Sultan Hamengku Buwono X who is also the Governor of Jogjakarta special Region. As the palace of Jogjakarta kings, physical or non- physical, it has sacred symbol, completed with divinity, value, culture, philosophy, history and humanity. There are a museum displaying souvenirs from The Sultan’s guests especially from the a board called Souvenir Museum, as well as a museum of Batik collection and museum Wayang (puppet). Equally interesting the various forms of traditional art activities such as shadow puppets shows, classical dances and gamelan performances are still performed in the court and open to the public.