Prawirotaman Kampong Has Many Lodgings 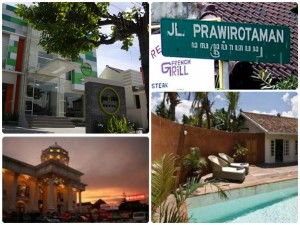 Prawirotaman,  There are not only unique lodgings at affordable prices in this area, but also art shops, cafes, book shops, a traditional market, and a stone inscription that can be an alternative tour as well.

Prawirotaman as a kampong began to be known in the ninth century, when a servant of the kingdom named Prawirotomo was granted a piece of land. Since the beginning, this kampong has been playing quite big role for Yogyakarta. In pre-independence era, this kampong functioned as strugglers’ concentration point. In the post-independence era, 1960s to be exact, this kampong was famous for its printed batik that was managed by the descendents of Prawirotomo. Since 1970s, however, when batik business began to slack, the descendants of Prawirotomo clan switched their business to lodging services and, hence, Prawirotaman was known as a tourist kampong.

Entering Prawirotaman area, you will be greeted by nuance of the kampong in a city center with vehicles passes to and fro of the street and warm welcome by local inhabitants that most of them at least speak English. A chain of hotels with unique architecture, from classic Java to modern design, is available. The rates are around 100,000 to 500,000 Indonesian Rupiah. Even though there are several hotels of which management have been done by other people, most of the hotels are managed by the descendents of Werdoyoprawiro, Suroprawiro, and Mangunprawiro big families.

The area of Prawirotaman I or usually is called Prawirotaman is the most popular area. In addition to lodging, there are other facilities in this area such as travel agents, internet connection and telecommunication booth, café, restaurant and bookshop. Cafes and restaurants serve both Javanese cuisine and European cuisine or blend of them. The bookshop provides good books at cheaper prices. Imported books that normally cost hundreds thousand can be obtained only at 40,000 to 80,000 Indonesian Rupiah. Sometimes, foreigners exchange their book collection.

Some art shops sell unique, artistic works. There are tables made of bamboo, batik cloth, cupboard made of whole log and antique things such as decoration lamp and old kris. One of saleable antique things is batik mould. This mould is used as decoration, air ventilation or a collection of high historical value. Once, a German bought 1,000 batik moulds from a batik factory that does not operate anymore.

To the south of Prawirotaman I area is Prawirotaman II that directly borders on a traditional market. Walking through the tradition market in the morning is an alternative of an interesting tour. While looking at the busy people who buy daily needs, you can try traditional snacks. If you go further to the south, you will come to Prawirotaman III area. This place mainly functions as a dwelling place of local people.
Even though the real name of the areas to the south of Prawirotaman is Prawirotaman II and Prawirotaman III, the area is known as Jalan Gerilya. According to story, the area was the headquarter of Prajurit Hantu Maut (the Deadly Ghost Soldiers) as the Indonesian independence strugglers lead by Mr. Tulus. At the corner of a street, there is a stone inscription made to commemorate the struggle of the troop. The other troop in the area was Prawirotomo soldier. 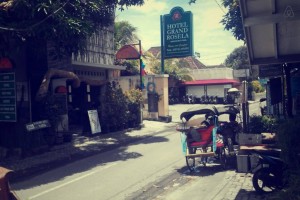 You do not have to worry for the transportation for your tour. Some motorcycle and car rentals, even pick up service are available. If you have not set up your itinerary, some travel agents have sufficient reference of interesting tourism objects, ranging from cultural tourism such as temples and Sultan Palace to adventure tourism such as trekking.

Prawirotaman has many lodgings at affordable prices; most of them are managed by descendents of one clan. This predicated ‘international kampong’ was once an independence struggler post and a famous batik business area. Now 3 and 4 star also available in this area, visitor can decide the hotel stay as their budget. More information this area please contact us.