Merapi Lava Tour in Yogyakarta – Traces of the eruption of Mount Merapi in 2010 is packaged in the form of lava tour by tour Sleman district government . You can directly approach marks the brunt of hot clouds and lava Merapi ‘s cold , especially at the village wat , Umbulharjo . You are so far only see lava or trim material from the television or read the newspaper , now can view them up close .

Travel Gig lava covering the region , Umbulharjo , Cangkringan . In these areas , the cold lava reached heights of up to 20 meters which would be very interesting curiosity to see and touch the Mount Merapi material directly . Tourism lava tour will be done when Merapi under normal conditions and does not enter the danger zone of Merapi . You are allowed to see the condition of the material comes Merapi is still hot and burning villages . From this area , you can see the towering peak of Merapi as high as 2,968 meters above sea level ( asl ) decorated by smoke sulfatara that never stopped pouring from the mouth of the crater , shows that this mountain move never stopped .

Merpai peak promising allure to enjoy the beauty of the sunrise on the morning of the natural scenery of the mountain range Unggaran , Telomoyo and Merbabu . Mount Merapi and the surrounding areas offer tours volcano like cool weather , cross-country , the beauty of the lava dome is still active .

Mount Merapi, located in Central Java Province is located approximately 25 km from Yogyakarta , is the youngest volcano in the series that leads to the south of Mount Unggaran . Merapi became one of the world’s 16 volcanoes that are included in the Decade Volcanoes . Mount Merapi is predicated as one of the world’s most active volcano , Merapi holds the potential of natural disasters such as the eruption or eruption . Mount Merapi is one of the 129 volcanoes in Indonesia and is the most active . Recorded eruption of Mount Merapi period 2-8 years , but little activity as lava dome formation occurred almost throughout the year . 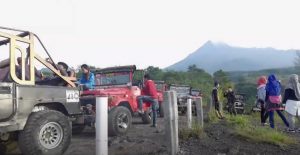 Mount Merapi was first formed around 60000-80000 years ago . But the history of new activity began to be observed and written as documents since 1791. Mount Merapi is formed due to the activity in subduction zones Indo-Australian plate under the Eurasian plate moves to cause the appearance of volcanic activity along the central part of Java Island . Geological researchers proposed various theories regarding malignancy Merapi eruption . One of them came from the famous Dutch geologist , Reinout Willem van Bemmelen , who filed the assumption that the great Mount Merapi erupted in 1006 . The great eruption , by archaeologists later interpreted as a cause for the centers of Mataram kingdom declined and then moved from Central Java to East Java . Merapi has erupted several times , including in 1672 , 1786 , 1822, 1872 , and 1930 . Then in subsequent years , which erupted in 1954 , 1961 , 1969 , and 1972 to 1973 . Another eruption occurred in 1994 which killed dozens of people , while the 1998 eruption did not cause casualties , because they erupt pointing up . Occurs also brunt lava and hot clouds or “wedhus gembel” when the eruption of 2006 .

For communities surrounding Mount Merapi sand material many remarkable and good quality . Additionally , Mount Merapi is a very interesting tourist attraction and many visit to see the amazing view of the substation of view or who want to enjoy the beauty of Merapi peak to climb directly . Mount Merapi is a popular object for climbing this mountain is a mountain that is very fascinating . This situation changed drastically since October 26, 2010 when Mount Merapi erupted . Community area of ​​the slopes of Mount Merapi are currently living within the limitations after the eruption . They lost their homes , valuable possessions , and relatives . Previous peak of Merapi livelihoods are agriculture and animal husbandry .