Merapi Lava Tour Area – Kaliadem is a village in the slope of Mt Merapi that is totally destroyed after the last great eruption of Merapi in November 4th and 5th , 2010. The hot cloud ( pyroclastic flow ) hit this village. 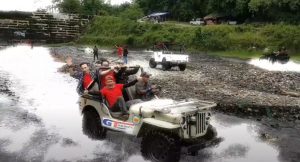 At this time, Kaliadem areas is dominated with white sand and the stones from the Mount Merapi eruption, looks more exotic. Sometimes, Merapi Peak is seen so clearly without any equipment tools because it’s very close. Especially at night, the visitor can watch molten lava from the peak. The red lava looks contrast with the dark night sky. One more thing that interesting for the tourist is the bunker where two of safety guards of Merapi were died. They were trying to enter the bunker when the hot clouds slide down from the mountain. It’s a pity that the bunker was closed with dry lava and vulkanic material, so their body roasted inside.This position of the Kaliadem is 1100 meters above the sea level. It’s make the air still relatively cool, although the tree forest was destroyed when the hot clouds hit on. On June 2010 the government closed Kaliadem until the situation safer and the activity of Mount Merapi back to normal. When the area was opened again, hundreds visitors has been came until today, locals and foreigners reach the location by American Jeep and motoriding. And now, these objects can be seen at Gunung Merapi Museum. 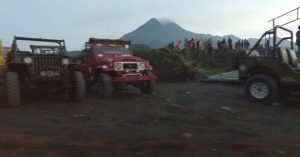 Because of the accident, sometimes the local peoples tell about local myth. There are restrictions for visitors who want to enter Kaliadem using clothes with red, yellow, or orange color. The local believes that if someone use one of the color, it can cause the lava from Mount Merapi come out and will catch up the owner of the color. Don’t be afraid with the eruption of The Mount Merapi. Southern place is placed with volcano signal and alarm.

When you planned to visit Kaliadem don’t forget to bring your camera. Takes every moment and every corner at Lava Tour area, there’s area you will get a lot of interesting object and exotic view.