Merapi One of The Most Active Volcano in Java 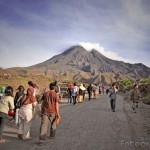 Mount Merapi, the most active volcano in Java

Merapi One of The Most Active Volcano in Java Merapi Mountain National Park Living in the shadows of active volcanoes is like sitting on a time bomb, especially when one of them is called Fire Mountain or Gunung Merapi in Indonesian language.

Merapi is one of some 500 volcanoes in Indonesia, of which at least 129 are considered active. It lies in one of Indonesia’s most densely populated regions and is only a few kilometers from the Sultanate of Yogyakarta.

Despite frequently giving out smoke, the Mountain still attracts hikers and climbers. it takes 5 – 6 hours to climb up and 3 – 4 hours return.

Location near Yogyakarta, a Sultanate in Central Java, access to Merapi Volcano from Yogyakarta go further north to Kaliurang or Selo hill resort car, Kaliurang stands at 900m on the slopes of Merapi.

The best season to visit Merapi Volcano on May to September every year. 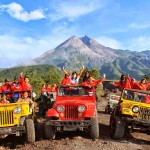